At the beginning of this series, we looked at plotting map references, using grid lines. Well grid lines on their own can be (and often are) used as a form of navigation. So be on the look out for a stream of 2 figure numbers.
Now the principle is simple. The route crosses grid lines, and given those gridlines it is a straight forward process to plot the route …..... or is it?
Let's start with a simple exercise. Lesson 3 (Herringbones) left off at MR NW659425 near Lasham. So the route is heading South East. Follow the road to the next grid line crossed, which is '66', and cross it. Immediately the route then arrives at a 'T' junction, and you must decide which way to go. The next grid line you are given is '42'. Therefore, to cross line 42 you must turn right. Get it? Try this then:

From the ITC at NW659425, proceed to the next ITC via the following 'in order' grid lines:

Remember. Where there is a choice of routes, you take the shortest.

No cheating, but check your solution HERE.

Having checked this, you may have questions. You will note that after crossing grid line 42 the first time, there are two ways to follow '67, 42,'. Remember the old adage 'SHORTEST ROUTE' and all becomes clear. The same applies at '67' near Southrope. Shortest route wherever you have a choice, unless clearly stated otherwise. 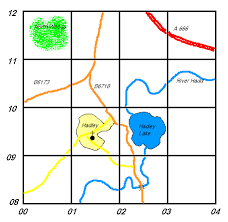 OK, so you got the basics of crossing gridlines, when they are given to you as they are presented on the map, two figure numbers. But Nav setters often look for map features and other means to make life difficult. For example have a look at the region of the map NE from square 46/46 near Whitchurch. You can see here that both Northings and Eastings carry the same numbers. Now that is going to be really confusing, and don't assume that they won't do it to you …. they will! Now, when you become experts, the setters like to complicate things even further, the grid lines could be given as single numbers, made up from the two numbers of the grid lines ie: 43 could be presented as simply 7 (4+3). Now they do this, particularly in an area like 46/46 and life's a bitch! Note also, that this could confuse matters just as much where the Northing is say 43, but the Easting is 34.
Other presentations could include multiplication, division, subtraction etc. It just depends on how much of a psycopath the nav setter is.

Link to down load this page in PDF

Note: Before buying any equipment, check around your Motor Club Buddies first. You never know what is up for sale, or even available from the Club itself.
Powered by